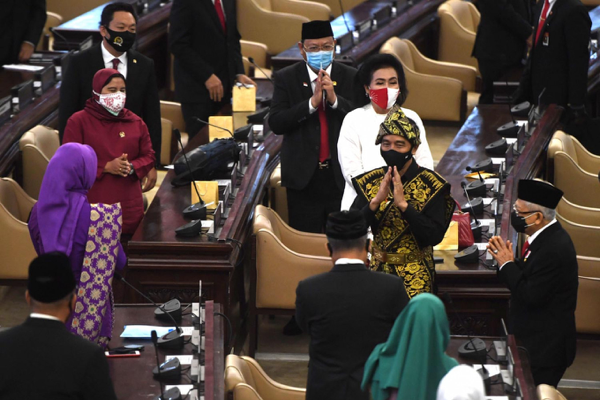 “This will narrow down our current account deficit, increase our employment opportunities and start tackling fossil energy domination,” he said in his state of the nation address delivered before the People's Consultative Assembly in Jakarta on Friday.

Jokowi mentioned state-owned oil and gas giant Pertamina’s recent successful trial production of “D100” green diesel, a more engine-friendly biodiesel than the one currently available. He said the production would absorb “a million tons of farmer-produced palm” to produce 20,000 barrels of fuel each day.

Indonesia is the world's largest producer of palm oil, an industry that employs millions of citizens, mostly farmers. However, the palm oil industry is a major contributor to massive forest fires and deforestation.

Jokowi also mentioned the government’s landmark ban on the export of nickel ore, a metal mainly used to produce steel and car batteries. Its demand is expected to rise alongside the rise of electric cars. The ban shook global markets as Indonesia is the world’s largest producer of nickel.

“This will place Indonesia in an even more strategic position in the development of lithium batteries, the world’s electric vehicles and as a future technology producer,” he said.

The President added that Indonesia would reform regulations and continue developing industrial estates, such as those in Batang, West Java, and Subang-Majalengka, West Java, to get more industries to invest in the country.

He promised the giant estates would not undermine Indonesia’s micro, small and medium enterprises, which absorb over 90 percent of the domestic workforce.
Developing downstream industries is part of the Jokowi administration's larger ambition of transforming Indonesia from a commodity-driven economy into an industrial one, with the ultimate goal of becoming the world’s fourth-largest economy by 2045.