Protest at Freeport's Grasberg Mine in Indonesia Extends to Second Day 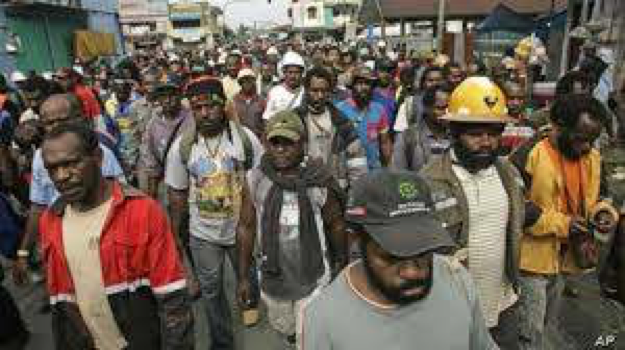 Workers at Indonesia’s Grasberg gold and copper mine operated by the local unit of Freeport-McMoRan Inc extended a protest into a second day on Tuesday as they demanded an easing of a coronavirus lockdown
More than 1,000 mine workers had joined the second day of protests and blocked access to the world’s second-largest copper mine in the easternmost region of Papua, Yonpis Tabuni, a workers’ representative said.
“Our demand is not met yet. Today there is a meeting with the local government and the management,” Tabuni said.
Asked whether the protest have disrupted mining operation, PT Freeport Indonesia’s spokesman Riza Pratama said on Tuesday “we continue to monitor and conduct negotiations.”
The company was working on a new working schedule that adhered to “new normal” protocols, he said a day earlier.
ADVERTISEMENT
“Hopefully there will be a resolution soon,” Pratama said.
Freeport mine workers were asking for the company to allow employee bus services to resume amid travel restrictions implemented to contain coronavirus infections.
ADVERTISEMENT
Freeport Indonesia said in May it reduced number of workers and restricted travel in and out of the mine due to rising number of coronavirus infection in the area.
Local government data showed as of Monday there were nearly 700 coronavirus infections in the Mimika region, where Grasberg is located.
Operations at Grasberg are currently shifting from open pit to all-underground mining. The mine is expected to produce 110,000 tons of ore per day in 2020.
Source: Agustinus Beo Da Costa, Fransiska Nangoy / Reuters Indonesia
25 August 2020