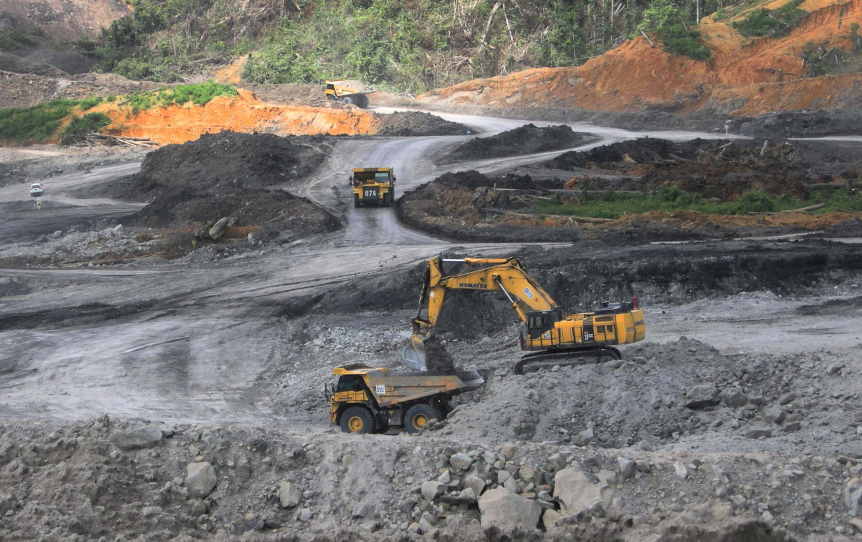 Extractive industry players have expressed doubt that the recently passed Job Creation Law will be quick to solve issues hindering the sector’s growth despite hopes over deregulation and potential future investments offered through the legislation.
The omnibus law simplifies administrative-related articles from 79 older laws in various sectors, including oil and gas, mining and geothermal laws, in the hopes of growing businesses and generating employment.

Three extractive industry association leaders have said that, while cutting red tape is important to attract investment, the law failed to address many other critical issues, including the most immediate one: the COVID-19 pandemic.

“This [law] is not going to immediately boost upstream oil and gas activity. If anything, activity will continue going down because of COVID-19 and low oil prices,” Indonesian Oil and Gas Companies Association (Aspermigas) chairman John Karamoy told the Jakarta Post on Thursday.

“Once those issues are solved, we can talk about land and permit acquisitions, but even then, whether or not the law will increase investment remains an open question,” he said, adding that Indonesia’s thinning oil and gas reserves were another long-term challenge.
Oil and gas attract the biggest investments among three extractive industries. Before the coronavirus outbreak struck, Indonesia projected oil and gas investment to reach US$13.8 billion this year, dwarfing that of mining ($7.8 million) and geothermal energy ($1.5 billion).

The omnibus law is the government’s big gun in its plan to maximize Indonesia’s extractive industries, which help form the country’s backbone for trade and nontax state revenue (PNBP).

“The point [of the law] is to ease investment and create more added value from our natural resources,” Energy and Mineral Resources Minister Arifin Tasrif said at a joint ministerial briefing over the law on Oct. 6.

He claimed that the law introduced relatively little change to the three extractive industry laws, with the 2009 Mining Law more affected by the recently passed 2020 Mining Law.

The bigger impact on extractive industries might come from the Job Creation Law’s revisions to regulation on the environment and spatial planning in terms of simplifying permit acquisitions for industries.

With the revisions, bureaucracy is centralized under the government, instead of with regional administrations, by adopting a so-called “risk-based approach”, instead of the previous licensing approach.

The risk-based approach presents businesses with less red tape for projects deemed “low-risk” and “medium-risk” for the environment and local communities. Australia, a fellow heavyweight in extractive industries, employs a similar practice of “risk-based licensing” in New South Wales.

However, investors, watchdogs and experts have raised concern that this approach erodes environmental safeguards in Indonesia, one of the world’s 17 biologically megadiverse countries.

“This risk-based approach is attractive for investors that want to clear away forests and destroy the environment but not for the export-oriented manufacturers that Indonesia needs,” said natural resources economist Berly Martawardaya of the Institute for Development of Economics and Finance (Indef).

Nevertheless, geothermal developers were hoping the centralization would boost investment into their industry, said Indonesian Renewable Energy Society (METI) executive director Paul Butarbutar at a renewable energy convention on Friday. “We really need debureaucratization and deregulation to speed up permit processes,” he said. “But, of course, government permits are not the only obstacle for investment […] much more needs to be done.”

He mentioned other challenges over geothermal energy that remained unaddressed by the omnibus law, such as project financing, project bankability and state-owned electricity giant PLN’s limited appetite for green electricity.

Such fiscal incentives were justifiable, Rizal argued, because downstream coal projects were “very high cost”. The country’s only two such projects cost at least $2 billion each.

“These terms will stimulate and raise investment in downstreaming coal,” said Rizal, who is also a director at a coal mining company. He added that, going forward, miners were waiting for a government regulation (PP) that would detail the incentives promised in both the Job Creation Law and the 2020 Mining Law.

Environmental watchdog Mighty Earth campaign director Phelim Kine, in a statement on Oct. 5, called on the government to work “in close consultation with environmental and civil society organizations” while drafting implementing regulations.