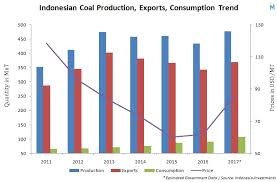 Indonesian government has increased its coal production target to around 507 MnT from a previous 485 MnT for CY18, a move which is likely to add further pressure on declining coal prices.

According to Mining News Pro -Official from Energy and Mineral Resources has informed that the additional output quota of 21.9 MnT has been split among 32 coal miners', but declined to provide details of the companies that were awarded with these additional quotas.

The ministry has intended that the additional coal volume so produced could be exported, also making it clear that no further applications for increase in quota would be entertained hereafter.

The move by the government can be seen as a way to help the Indonesian rupiah, whose value has fallen nearly 10% against the US Dollar this year.

However, it is likely the revised production target would take its toll on miners which are already facing difficulties due to heavy machinery shortages. Besides, weaker demand from its key buyer China could dampen Indonesia's hopes of exporting the additional supply.

An ample domestic coal stock has dampened coal demand from China, which has been the reason for the drastic fall in Indonesian coal prices since Jul '18.

Although Indonesian low CV market has slightly picked up given the return of Chinese buyers to procure imported coal for blending, mid CV market has continued to remain subdued.

Adding woes to the buying interest, the Chinese government is yet to set a quota of coal to be maintained at the power plants.

While Indonesian government's attempt to boost exports is unlikely to meet its desired goals, country's domestic coal consumption is also expected to take a hit as state owned power utility Perusahaan Listrik Negara (PLN) has recently revised down its consumption target for CY18, amid slower growth.

Official from PLN has said in a media briefing that Indonesia's coal consumption for power by PLN and IPPs is expected to reach 88.5 MnT in 2018, down 4% from the previous target of 92 MnT. But in 2019, the consumption is expected to increase to 96 MnT.

Indonesia's coal consumption for power was at 82.2 MnT in CY17.